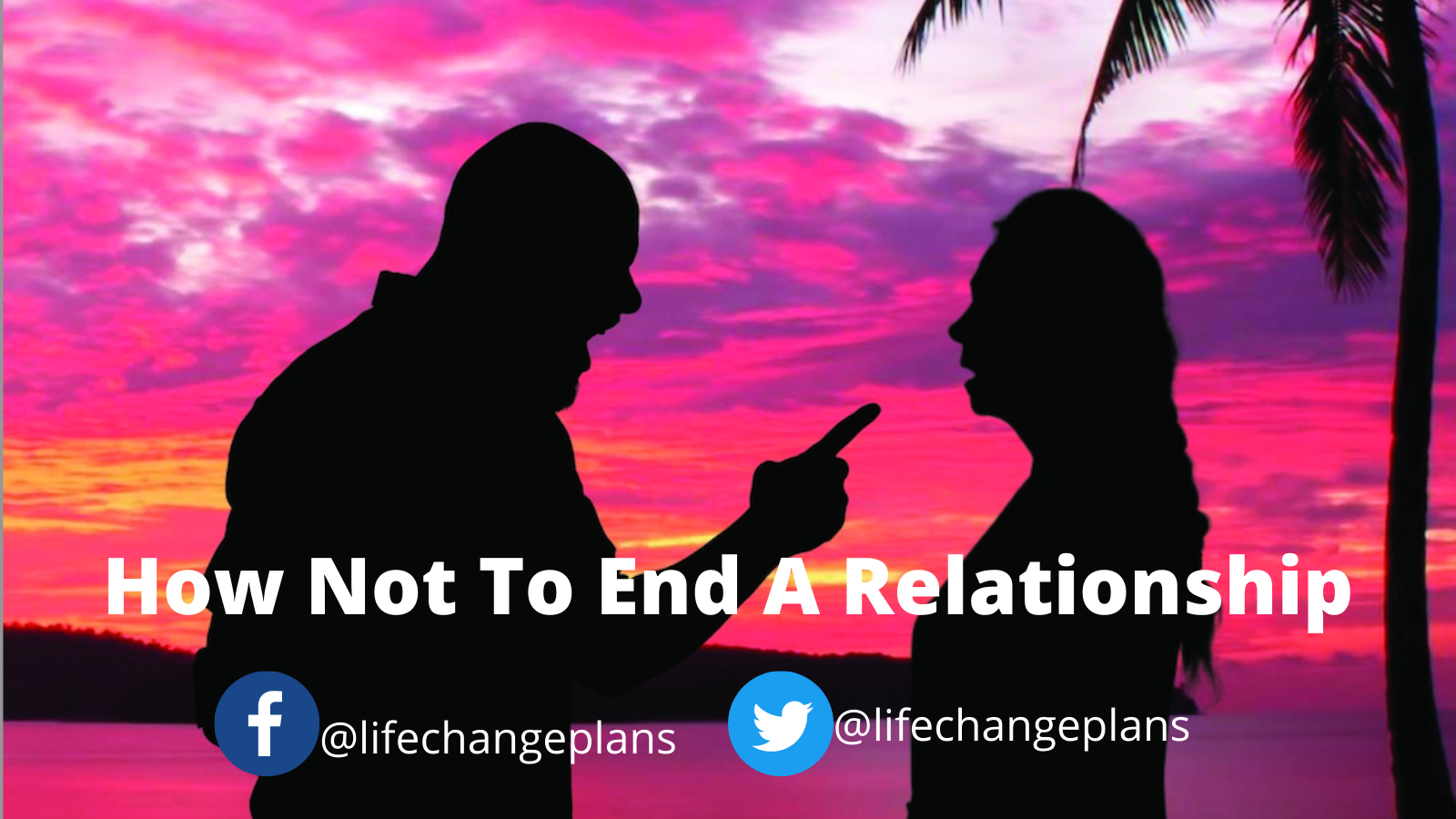 How Not To End A Relationship

Things A Narcissist Does At The End Of A Relationship

1. Find cruel and heartless ways to break things off.

They have a total disrespect and disregard for your feelings and emotional wellbeing. You are of no importance. Narcissists believe they matter more than other people and deserve to be treated that way. Narcissists are highly skilled at making you feel as though you were the most important person in the world, only to tear it all away.
They also have Jekyll and Hyde traits where they can love bomb and then devalue you in a cycle. For example they will buy you gifts tell you they love you, then a few weeks later they devalue you saying things like “no wonder you don’t have any friends” or “no wonder nobody loves you”. When they have secured a new supply a new partner, they will discard you, end a relationship without looking back. They also tend to move on very quickly with no thoughts about the person they leave behind, which can be devastating. There will be no apologies no remorse.

2. Attempt to convince you that you can remain, friends.

They try to keep a few women hanging around so they can have more than one relationship going on at the same time. For example, remaining friends with the ex-wife or partner then going off to meet them for dinner dates or hotel rendezvous. Narcissists like having more than one supply, usually the main supply and also a secondary supply. Meanwhile, in the beginning, or love-bombing stages of a new relationship, the narcissist will complain to the new partner about how crazy the ex is and how they are persisting in contacting them. The reality will be very different when you discover that they are still meeting with the old flame or ex-partner. Obviously, to the new person in their lives and those people looking at the situation, the narcissist can appear charming, engaging and charismatic.
If you are breaking off the relationship and leaving the narcissist be prepared for the fight of your life narcissists hate losing their supply. In one past relationship, I remember ending a relationship or trying to end the relationship and the person would be in constant contact to try and win me back, that was long before I knew anything about narcissists and NPD. I would see ten or more missed calls on my mobile, and lots of text messages. I have also heard one man declare “I’m the best man you’ve ever had in your life” and “you’ll never find someone like me”.

So, I can tell you that, this past particular relationship was the best but also the worst relationship I ever experienced.

They will “move on quickly” — and tell you about it. For example, this is how it happened for me, after an evening entertaining guests, he tells me lets have a nightcap and sit in the comfy seats on the porch. Then as we are both sitting sipping our drinks he proceeds to tell me “I’ve got something to tell you, I’m in love with another woman, we can remain friends if you want to remain friends, we just can’t have sex anymore”
True narcissists don’t need time to heal from a break-up as their initial feelings about the relationship were likely insincere or absent. They have their exit strategy already planned out, it is you who is left in total disbelief and shock of the abrupt and sudden ending of the relationship.
Another good reason to go no contact and remove them from your social media — as there’s likely to be a lot of loved up selfies. Which, in my particular case there was, I was expecting it, six weeks after he left me, a neighbour called me to ask if I was okay, she had seen a post on Facebook. I had not seen it but said to her don’t tell me he has married her, she replied no, but they just got engaged. The photographs of the two of them and her with her hand in the air sporting her new engagement ring like a loved up teenager instead of a 60+ ex-girlfriend that he had just shacked up with again.

DARVO stands for “Deny, Attack, and Reverse Victim and Offender”

They will blame you. It’s all your fault. You were disrespectful, you offended them, you did not behave as they expected. You were meant to do what they wanted. Nothing is ever their fault, they will deny their bad behaviour. You might even see or hear that they are now telling everyone that they are the victim. There is a term for this and it is known as DARVO.
DARVO stands for “Deny, Attack, and Reverse Victim and Offender“. The perpetrator or offender may Deny the behaviour. Attack the individual doing the confronting, and Reverse the roles of Victim and Offender. The perpetrator assumes the victim role and turns the true victim into an alleged offender.

We can remain, friends, if you want to remain friends

Now, this is how I experienced the termination of the eleven-year relationship. The initial offer of a financial settlement was 50% of the sale price of the retirement home. Or him paying rent on yet another property if I wanted to move out of the house immediately. His carrot of he will pay me £35,000 after I move out. I received his “Dear Loren” letter just two days after he “dropped his bombshell” and left me suffering. I was a bit of “collateral damage, unfortunately” his words.
So, the initial let’s keep this amicable. We can remain, friends, if you want to remain friends flew out of the window. Now, of course, this can be seen as a very kind and generous offer. Maybe, but I had also been on the receiving end of his abuse. I had already experienced his lies, his angry outbursts, his criticisms and humiliations.
How he had started to pay me an allowance into my business account. How he threw that back at me whenever he wanted to get to me. In January 2018 when I was told “You have not got enough money to buy paper to wipe your backside with”. Or that the business I was involved in was “mug marketing”. The telephone conversation I recorded. When he started to rant because I was trying to get answers about the future of our relationship. He was carrying on his double lifestyle with his other woman in the UK. Listen to “don’t bit the hand that f***ing feeds yer”, and “It’s My Fault, I’ve made you dependent on me…”.

So I was told, “You’ve got four months in this house and if you haven’t bought it and if it isn’t sold I’m moving back in”. Then, “I’m telling you how it’s going to be and you have various options open to you. Help me to sell this place. Buy it yourself, or just sit here until the 15th of January and fuck off. Or any permutation of those three.”
The 15th of January 2021 is long gone. It actually took me until April 2021 to get to some sort of better place. Not thriving, but just surviving. Becoming resourceful, trying to find myself. Trying to think of how to get out of the predicament I found myself in. I write this now some seventeen months post-separation.
Just getting through the grieving process took a lot of time. The experience of trauma and fear was something I had never before been through. I have had some difficult life situations. We can all likely look back and say to ourselves, I don’t know how I got through that. However, nothing I had learned about in personal development had prepared me for how I would feel after the end of a relationship like this one.

JOIN THE WAITLIST  get notified when the ebook is published and when the paperback version is launched.