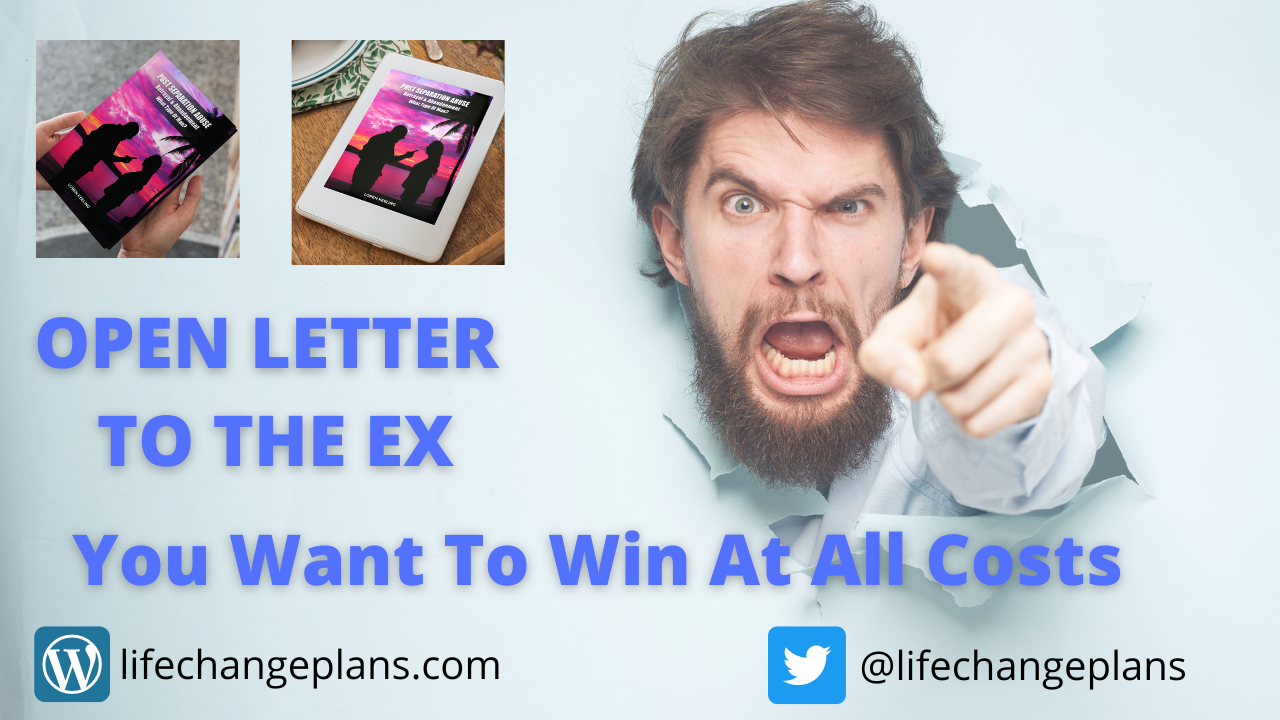 You want to win at all costs.

Open letter to the Ex.

You want to win at all costs.

But those costs are very high, not just monetary, but the cost of time, energy, and emotional welfare.

Stress is a known precursor to illness and that can be minor ailments to major forms of disease.

Including heart problems and cancers.

You were not content to intentionally inflict emotional distress in December 2017 with your confession of cheating, or infidelity. Telling me you had met up with a woman you first met in 2009 the same year that we met.  Asking me if I remembered you talking about a “Wednesday Girl” of course I had no recollection. I actually laughed because I thought you were telling me some sort of joke.

When the information sank in I stood up from the sofa where we were both sitting and walked into the middle of the room and I screamed, yes I screamed, loud and long until I had no breath left.

When I stopped screaming you stood up and came towards me wanting to put your arms around me as if you wanted to comfort me.

This was the last thing that I wanted. I walked away from you, there were no tears, and I was in shock. I never, ever thought you would cheat on me.  I trusted you. You broke that trust. December 2017.

You ended that affair in mid-2018, I had to work on forgiveness and acceptance and rebuilding trust and my self-esteem. By mid-2019 you were talking about our security in retirement and starting your business in Spain.

In 2020 you booked a removal van to transport our personal possessions and some furniture from your UK house.  I was happier that at last, we would be spending more time together. I had a social life and was about to take part in the Cartagena Carnival in February 2020.  Then by mid-March, the pandemic struck. Your plans were thrown off course. You did not return to the UK as planned.

In June 2020 I walked in on a conversation that you were having over your iPad. You obviously did not hear me returning. I came in through the kitchen and I overheard you talking to someone, I thought maybe you were talking to one of your sons.

Then I overheard you talking about me. However you were talking to, you said “Loraine is insecure”.  I did not think I was insecure. Then I heard you telling this person about how you had made your wills out, then I knew it was not one of your sons, because they already knew about the plans you had made in your wills in 2016.

I walked through to the porch where you were sitting. You very quickly ended the conversation telling the person, Loraine is here I will have to go.

I never asked who you were talking to, but I made a mental note. June 2020

We stayed together all through the worst of the pandemic, it was 6 months before you would return to the UK. That removal van was rebooked for the time that you were back in the UK. You left Spain in July.

You sent me the photos of the items you packed in the van, telling me it will be like Christmas unpacking everything.  And there I was believing that at last, we were going to be together in Spain in our retirement home.

But by that time you had already deceived me, only I knew nothing about it did I? You had been talking to an ex-girlfriend that you had lived with briefly during the early 1980s

When I came to the airport to collect you, you did look different. You said you felt better than you had ever done, that you knew you could get well again and that it would take work.

The next day August 26th we spend all day together as you talk through your therapy. You even offer me the opportunity to have the same transformational therapy, telling me it would help me to find the success in business that I always wanted.  You wanted to book flights to return to Bristol, hire a car, book a hotel and you would be there for me, while I did the same therapy.

In my mind, all I could think was WHY?

The next day I was going to an art class and shopping as we were entertaining friends that evening. Before I left I gave you a kiss but you seemed strange, I remember saying that now that you felt like a new man perhaps we could get back to having sex again. I don’t know why I felt that there was some tension. August 27th

By the late evening, after the guests had left, you suggested a nightcap, “let’s sit in the cosy seats on the porch and have a nightcap” as I tidied away you poured the drinks.

We sat down and I had just taken my first sip of the drink you had prepared when you said.

“I’ve got something to tell you”

Whoah, flashback… December 2017 when you said I’ve got something to tell you and promptly confessed to infidelity.

Your next sentence was,  “I’m in love with another woman”

And “we just can’t have sex anymore.”

The 4 sentences that you used to abruptly terminate our relationship.

There was no drama, I think I had some premonition or intuition not to react to what you had just said. I stood up and walked away.

I went into the kitchen, I was angry I threw my phone down onto the glass table it bounced onto the floor. I quickly picked it up and said to myself, no don’t break that you need it.

I walked through the lounge and into the bedroom, when I was in there I punched my fist into the door frame and said three times, You bastard, you fucking bastard.

That evening lasted until 4.30 am or maybe 5 am because you sat on one sofa and I sat on the other sofa and I started talking about my life and the events I had been through.

I remember I told you that you were repeating the same mistakes of your past.

I also said that you had just thrown a whole load of dominoes up in the air and neither of us would know when those dominoes would start to fall down. And lastly, I remember saying I was going to write the book of my story. And I did and I self-published that book in May 2022.

Now in August 2020, I had no idea how things would unfold after your 2nd confession and abrupt termination of our relationship. I was not able to start writing that story until April 2021. It was after I had experienced some of the most traumatic months of my whole life.

The relationship with you was a roller coaster.

So now you have read the book and you have stalked my social media profiles, taken screenshots as evidence of defamation, slander, and harassment, and filed 7 charges of criminal misdemeanours.  Not content with threatening to throw me out on the streets before you left me in Spain, (4th September and 15th September.) You now have your specialist Barcelona lawyers sending me your court summons for these criminal charges and they spell out in Bold and CAPITALISED the seven charges and the maximum prison sentence attached to each misdemeanour. A maximum of fifteen years combined.

This is the summary of the allegations translated from the Spanish court documents that you have alleged against me.

The following penalties are requested:

– CRIME OF MISAPPROPRIATION of art. CP 253: 3 YEARS OF PRISON

I was not going to translate the document into English as I thought of it as a waste of time. But something was telling me to check what was written.

Oh boy was I shocked. Another court document with statements that do not resemble the truth or the facts of the situation. Just like the Civil Court documents I received for the “precarious eviction” in January 2022. Those documents were far removed from the facts with gaping omissions.

So now after 3 weeks of trying to engage a criminal defence lawyer and speaking to fourteen different law firms. The court prosecutor suspended the first hearing date. I was appointed a public defence lawyer, I checked his qualifications online only to discover he has a doctorate in Civil Law. That did not give me any hope at all. I asked him if he had any experience in criminal law defence where the combined sentence was 15 years, but he did not reply.

So now just over two years post-separation I am faced with two overlapping legal cases against me. Plus your lawyers point out that they have another Civil litigation to request cost and damages against me.

And I’m thinking to myself will I ever be allowed to actually enjoy my life? I never wanted any legal conflict, that was you.

You promised me financial security in our retirement together then betrayed me. Then you promised to look after me financially with a settlement from the sale of the property but the written and the verbal agreements have not been produced in court yet. You even made a promise to your best friend Tim as he wrote me a message to tell me he had asked you to give your assurances.

September 4th the same day you had already made your 1st threat towards me.

Then by October 5th 2020, your long rambling email told me everything I needed to know. You had never loved me apparently.

Well, the court document I have just received says that according to you I was just a piece of convenience and that I knew you had a partner in the UK and that the longest time we spent together was just 2 to 3 weeks each time.

Of course, all that is a pure fabrication.

So now here we are again you forcing legal conflict on me. WHY?

WHAT DO YOU REALLY WANT?

WHAT ARE YOU TRYING TO ACHIEVE?

Here is a song that I heard today, it prompted me to write this open letter.