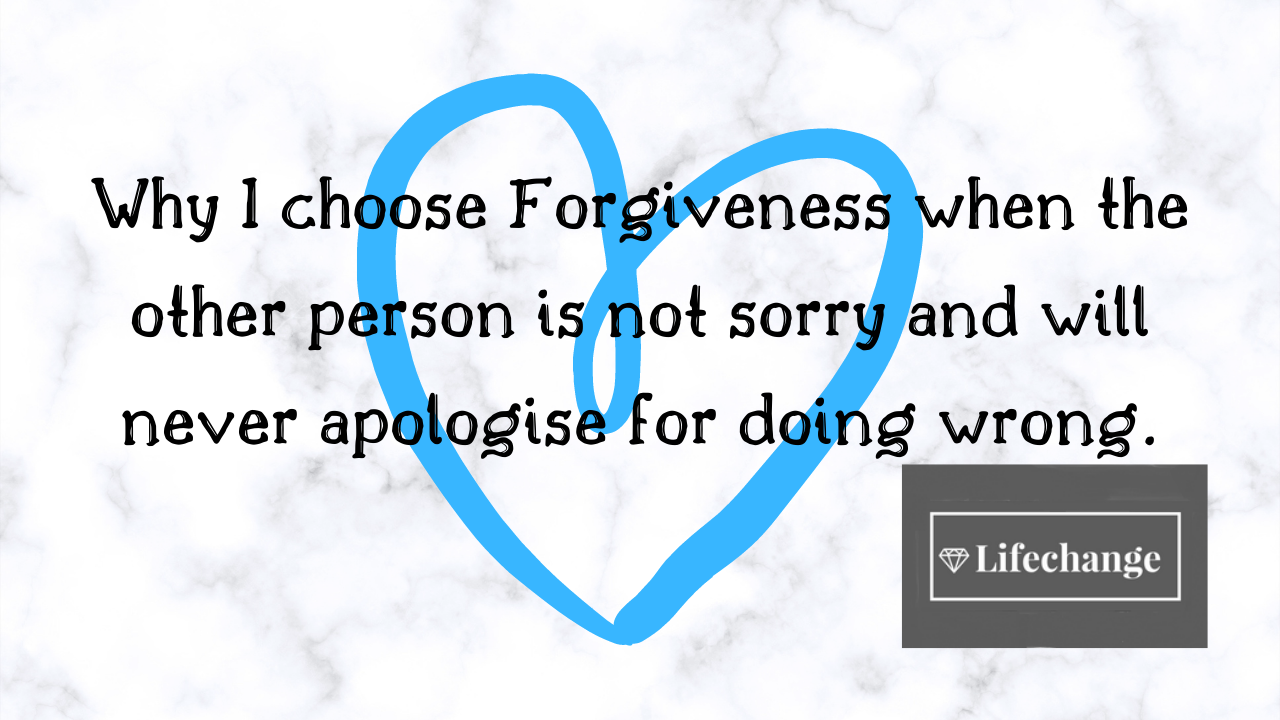 Why do I choose Forgiveness

Why do I choose Forgiveness when the other person is not sorry and will never apologise for doing wrong?

I felt I had regained my freedom

When the relationship ended the way it did, I felt I had regained my freedom. But I also felt hurt misled, used, mistreated by someone I had cared about. Someone to who I had opened myself up to. Someone who was supposed to be a friend, someone I had done so much for. I had given so much of my time, energy and life.  When I had gone out of my way many times, they took advantage of the situation. Unable to take responsibility or to fully commit to our relationship.

Even before he walked away from me and abandoned me in (what I thought of as our home) his home in Spain. I had in my mind that I needed to forgive this deep hurt. His angry outbursts, the terrible and cruel way he had come to end our relationship.

I had made a decision to cut him out of my life. There was no reason to stay connected. I didn’t want to be open to his manipulation, his control and to feel triggered by his words whether spoken or written.

We can end things amicably

He had said we could remain friends, we can end things amicably. But he proved to me that he was not worthy of my friendship. The moment he sat down to discuss how he might help me after I had written an email outlining a financial proposal. The 23 minutes became a one-sided rant of him telling me “what he wants and what he needs”. (The whole sad episode was recorded on my mobile device, which he agreed to.)

I needed time and space away from him in order to heal and to recover my emotional wellbeing. To become independent and financially secure again.

Maybe he would never be able to take responsibility for his actions.

I had learned about the power of forgiveness two years before. Listening to an online personal development seminar from the Proctor Gallagher Institute. I used the forgiveness practice to let go of negative emotions that were damaging me from the inside.

I was suffering, sleepless nights.

Even after he had gone, he was still able to get to me. His emails, the emails from his Solicitor. While I was still in shock, while I was still trying to sort out my life, my future. Trying to come to terms with the loss. The grief of losing him as a friend, a lover and a soulmate. It was traumatic, I was fearful, I was deeply hurt, I was suffering, sleepless nights.

Every night I would try to sleep. It was difficult with the same thoughts, of how my life would spiral downwards to being evicted. From homelessness to nothing, to being a total failure in life.

Then when I reacted to his messages, his constant moving of the goalposts. He then turns it all back onto me, blamed me for all the circumstances and situation that I was in.

Forgiveness is about freeing yourself from the burden of resentment anger and frustration.

He showed me no respect, he was disrespectful.

Anyone who has experienced similar hurt. You must always remember this is not your fault. You need to take charge of your life once more. Only then can you begin to see positive changes happening for you. Then you will see opportunities opening up for you, you will be able to move forward with your life.

Like I hope that I will move forward with my life.