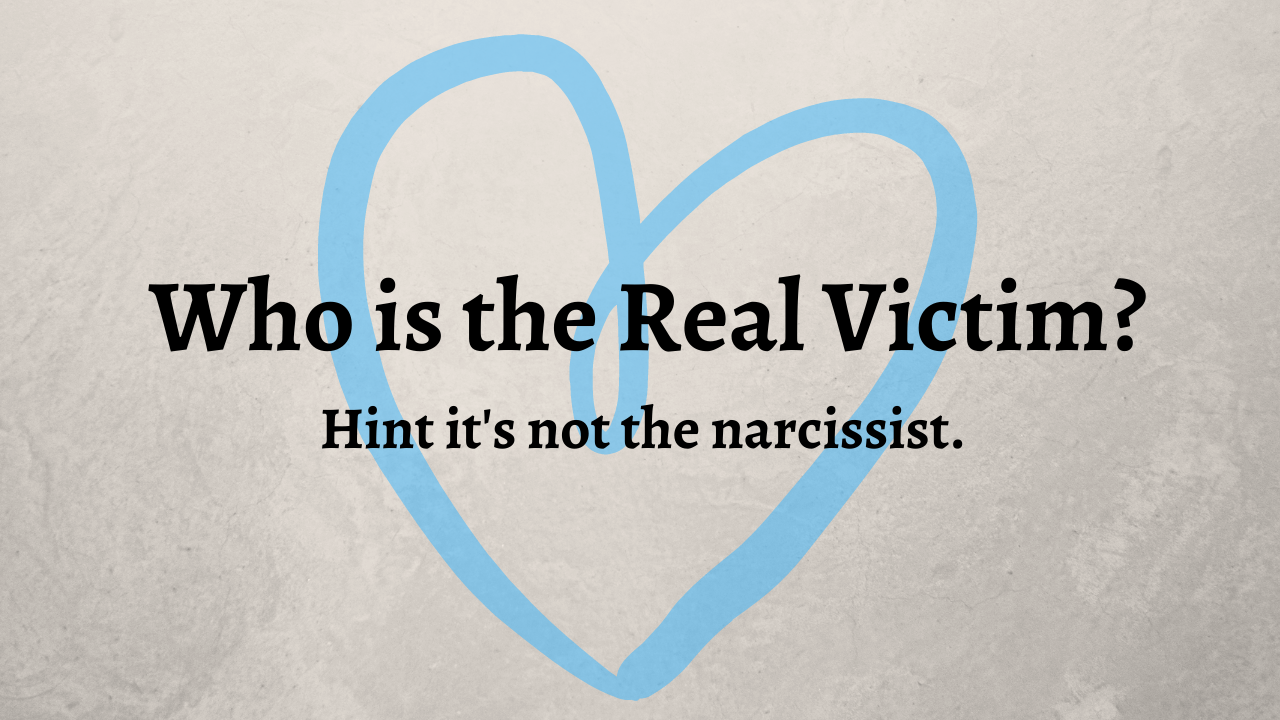 Who is the Real Victim?

HINT It’s not the Narcissist!

How you can tell who the real victim was after the relationship with the Narcissist ends.

I don’t want to be the victim, I was the recipient of emotional abuse from a partner that I loved.

That was my only crime, falling in love with a man that turned out not to be the man that I thought he was. When his behaviour towards me changed, I made excuses, I remained in this relationship for far too long. I lost myself, I allowed myself to become dependent. Despite my best efforts to make something of myself, I suffered failure after failure, I became trapped.  It was only through the many “Personal Development” training and courses that I was able to remain positive. I could not completely give up all hope of doing something or becoming a better version of myself.

I have since learned that narcissists project their abusive behaviour onto their victims and it doesn’t stop once the relationship is over. In fact, it ramps up.

The Narcissist has a long list of crazy ex-wives and girlfriends.

The narcissist also often plays the part of being hurt and wounded if the victim leaves them.

If they leave the victim the narcissist has already planned this, they have already found a new “supply” (another woman) they will have told lies about why the relationship ended they will tell people that their ex is crazy, has bipolar, has addiction issues,  mostly everything that they told you about their previous relationships before you.

As I was told similar things about the woman he had married before meeting me, that marriage only lasted 6 months before the separation.

So who is telling the truth, who is really the victim here?

Now, when the victim speaks out they may be saying exactly the same things about the narcissistic partner that has just discarded them. So who is telling the truth, who is really the victim here?  The recipient of the emotional abuse, who may or may not have been the person who initiated the discard is usually devastated.

Victims Isolates themselves or is already isolated from their family

Typically the recipient of emotional abuse isolates themselves they only interact with a few close personal friends or family,  quite often a person has become isolated within the relationship because of the coercive controlling behaviour of that partner although I haven’t seen my family for a number of years and there were various circumstances to this situation and some of that was my own feelings of shame and guilt on my part.

I blamed myself because of some major business failures and losing a lot of money end ending up in huge amounts of credit card debt that I was not able to service. I felt I could not reach out to family and friends because I was here in Spain living in a beautiful place in a beautiful house, however, despite the outside appearances, on the inside, my life was a lie.

You could not be fixed – he was the person who broke you.

So they tell the new supply everything, they were telling you in the first stages of the relationship and the new Supply takes all this in, it’s known as the love bombing stage.  This is where you get to see the kind generous loving person. The Narcissist starts the cycle again, what you remember in the love-bombing stage he will be telling you about past relationships, these women who are crazy.  Now he has moved on to another woman in another relationship and he is repeating exactly the same process as before he will be telling this new woman in his life how crazy you are and how he couldn’t help you, he tried to fix you, but you couldn’t be fixed. Unbeknown to this new woman the reason you could not be fixed was that he was the person who broke you.

Publicly exposing a narcissist or your abuser.

At any point where the recipient of the emotional abuse decides to tell her story, telling the truth about the situation and uncovers the narcissistic abuse within the relationship, the new partner will look at the situation and will react by thinking and forming opinions about how his ex-partner is crazy, vindictive, and revengeful because of the relationship ending and because her new partner (the narcissist) has already given her the narrative to believe the story that his ex is crazy, and wants to break up his new relationship because his ex just wants him back. (triangulation).

This (triangulation) is exactly what happened to me in the first months of the relationship I had. Unfortunately, I knew nothing about narcissistic personalities I didn’t realize that what was happening was triangulation and I didn’t see any red flags at the beginning of the relationship. I only know the emotional effect it had at the time that it happened.

It was some weeks after he had ended our relationship that I discovered the extent of the emotional abuse that I had endured and put up with during the relationship. The criticism, the belittling comments, the harsh words, the betrayal, the confession of his affair, the triangulation at the beginning of the relationship. The dawning realization that none of his relationships were fully committed.

People will not understand your situation

The Narcissist plays the wounded victim while the real victim is seen as the person who is in the wrong. Friends and families will not understand the situation. They will see that the relationship has ended,  they will not understand why you as the recipient of emotional abuse are unable to just move on. Only other people who have experienced emotional and psychological abuse in a narcissistic relationship will understand the situation.

Reactive abuse is when a victim is seen as the abuser, the person who is spreading smear campaigns and posting on Social Media, and sending communications to the new supply. This all plays into the hands of the narcissist.

So how do you know from the outside looking in on who is the abuser and who is the victim?

The narcissist is immediately in love with the new love of their life, the soul mate, declaring on social media a new relationship before the old one is completely ended.  The person discarded by the narcissist it’s likely in shock and disbelief and will take time to heal and recover before thinking about starting any new relationship. A victim can often back up what they are saying with supporting evidence the narcissist can not.

The victim is doing their best to heal from the situation, working on their own well-being, while the narcissist is distracting himself with the new Supply.

The power of speaking out.

A victim who chooses to speak out is doing so with the intention to help others, to help inform others of how emotionally abusive situations escalate into high-conflict and legal battles. They are not going to tell their story to seek revenge or to be vindictive in any way. Many victims write books to help inform not only individuals but also the justice and legal system, to speak up and show how sometimes Justice is not served.

Often the Narcissist will continue a campaign against an ex-partner and use lawyers and the legal system to inflict further emotional damage and create more conflict. The Narcissist will be telling others that the ex-partner is unable to move on that his ex is crazy, vindictive and revengeful. The Narcissist says these things because they fear that they will be exposed, meanwhile the victim is telling the truth and is not being believed. This is how the survivors are re-victimised, people do not want to listen, people still think it is okay to re-victimize survivors.

Now that I know more about narcissistic behaviours. I have come to realise that I experienced at least two long term relationships where I have been exposed to lies, violent and abusive rages, emotional and psychological abuse. Plus in the case of one relationship actual psychological and physical harm.

I can look back and see exactly where I made excuses for the disrespectful behaviour, the verbal abuse, the bullying and emotionally abusive events. Now I can see how I missed the red flags that should have been warnings.

Not knowing anything about narcissism when I met my partners, I have since learned a lot. All I ever wanted was to be in a loving committed relationship, one where both partners are faithful. Where both parties are able to talk openly about their feelings and what it is they want to do with their lives.

I did not realise that in two of my relationships I could not be the person I wanted to be. I always put the other person first, it didn’t matter what I wanted to do. If what I wanted to do did not match what they wanted, then it was insignificant. So, I would let go of my ideas, my dreams, and I would not move forward with business ideas that I had. It is difficult to do when you are in a relationship with a person who has such ingrained negative traits.

See my article Are you screwed?

I can not go back in time.

The last thing the recipients of emotional and psychological abuse (survivors) needs is to be shamed or blamed by so-called friends or neighbours who have never walked a mile in their shoes.

Visit my YouTube Channel for my 5-minute Positive Affirmation Videos.
I started this channel as a way to do something positive and to help me to heal from the trauma I had experienced.
I will continue to add articles to this website and will get back to posting on Mondays. My main focus in the last few weeks has been writing about toxic relationships, but I will also be doing more articles on “Personal Development” and a positive mindset in future articles.

Support my first book launch  Or Join The Wait List