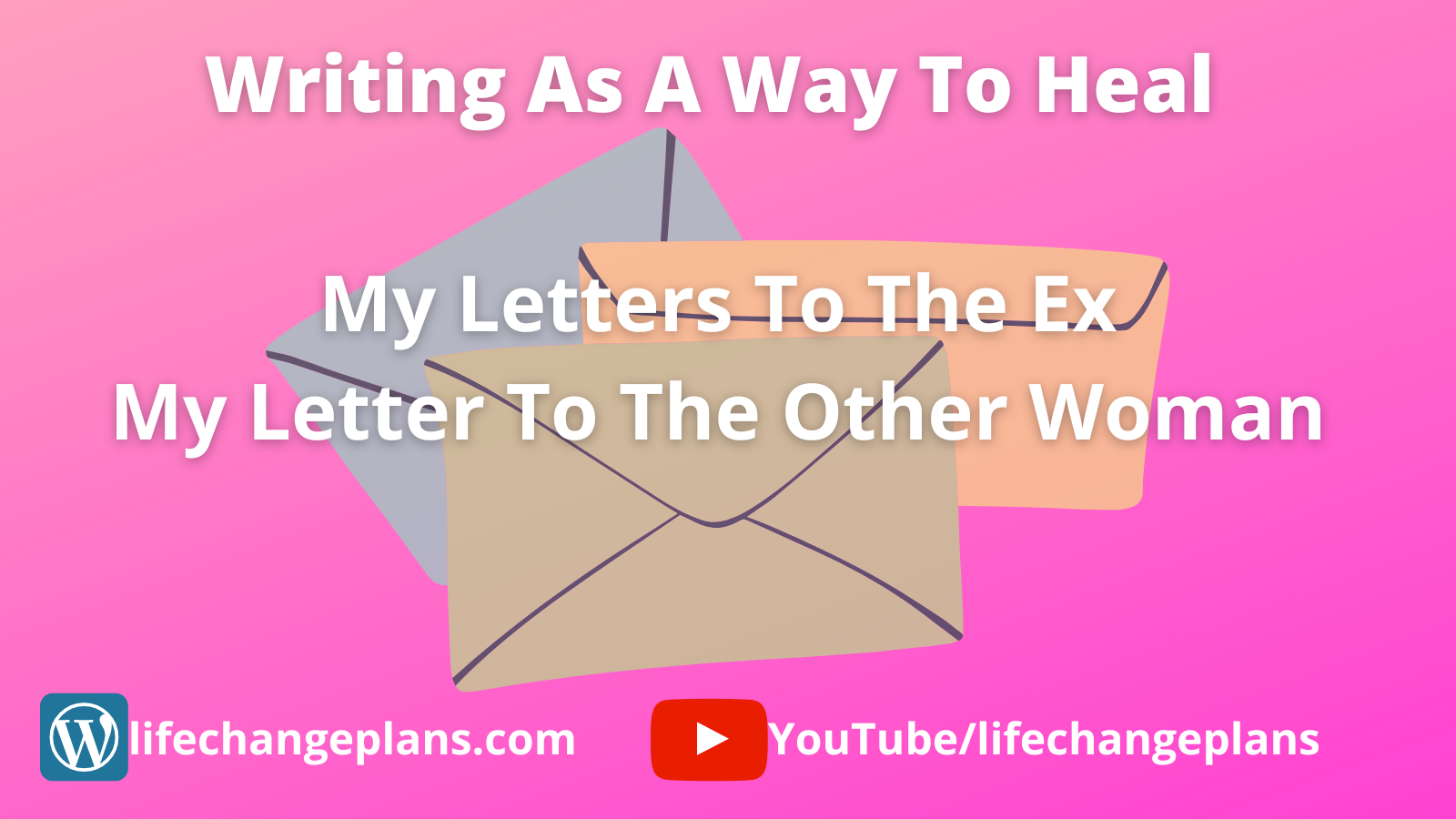 Writing As A Way To Heal

My Letters to the Ex

What do you want?

I listened to everything you told me on that afternoon of September 15th 2020.

Yes, you saw a “Go Fund Page” I had written, that our friend shared on her Facebook profile…. Perhaps a decision made from fear is always the wrong decision.

That was my attempt to try and secure my future here. I was in shock, at your second confession in two years.

I had no income and only a small amount of savings, you were offering me a “financial settlement” that you called a “GIFT”. You were telling me that I needed to leave the security and safety of the home I was living in before you would provide me with that gift.

In that financial settlement, there were some unknowns. I replied within 10 seconds of reading your “Dear Loren” attachment in the email you sent me. Remember how you sat in the office and couldn’t get the printer to work, you were nearly in tears as you asked for my help to print out that letter that you were so eager for me to have before I left for a meeting that morning. You had no idea where I was going or who I was going to meet, you didn’t even ask?

I told you to just send it in an email. So when I arrived in the next village I sat in my car and opened my phone to see your email staring back at me. I was going to make a call to the NLP practitioner that you had been to see over that last weekend before you arrived in Spain to be with me.

I very quickly read the attachment and then replied. ”Thanks but no thanks” I have a lot to process right now…

I could hardly take things in.

That “Go Fund” page may have angered you, but to be honest it could have been much worse. A lot of women in my circumstances may not have been so calm.

A lot of women could have reacted differently.

I do not know what you expected by your confession on the 27th of August, but my anger was not directed at YOU. Was it Phillip?

I walked away from you that evening. I had my outburst in private in the bedroom out of the way.

I think perhaps you had a lucky escape. I have seen angry women fight with men. It’s not nice, it is ugly.

In childhood, I experienced my parents fighting with each other. The time my father stayed out late at the pub and had arrived home long after “chucking out time”. He arrived home and apparently (as I heard the story later) my mother had lined up all of the brass ornaments along the fireside shelf.  As he walked through the door of the living room those ornaments flew across the room in his direction. As a very young child, asleep at the time, I did not see this but I heard the shouting and the abuse that went on.

The next morning I saw that my mum and dad had bruises on their faces. I heard my mum tell her story of what happened that night. So even as a very young child things are heard and understood.

I know from my own research, that a man who cheats repeatedly does not value commitment. A mature person would feel guilt and shame and stop themselves from repeating the “mistakes” from the past. The “narcissist” is not grown-up or emotionally mature, they don’t feel that guilt or shame, and they don’t value commitment, honesty and integrity. The other person’s feelings, heart, and emotions are never taken into consideration.

The way you blurted out your “I’m in love with another woman” and “we can still be friends” statements, caused me maximum damage and maximum hurt. Quite often a person who has long-term affairs, or is a “serial adulterer” with repeated cheating is someone who could possibly have “narcissistic disorder”  because it takes a special person to not feel empathy, any guilt, or any shame and still play the character of a loving boyfriend or partner. That’s not a normal healthy person whatsoever.

So you moved on very quickly, actually before you ended our eleven-year relationship. I just wonder how you could be writing to me in text messages telling me how much you were looking forward to seeing me and being with me in August. When you had been talking to your new female friend even before you left for the UK in July.

I saw how you posted that you had finally found the love of your life (again) and how you felt happier and healthier than you had in years. How you wanted to prove to the world and to yourself that you did nothing wrong and that your actions were justified. How just six weeks after abandoning me here in Spain, you had “plighted your troth” oh dear me!

And now, I hear from a friend that in less than a year since you left me here with no means of supporting myself yet, you have “married” the woman you lived with briefly when you were both in your twenties. I see you have taken the plunge and cemented your new relationship. Well, good luck to you

Congratulations to both of you.

May you be well.

May you be happy

May you live in peace.

Taken from my now published book. Part Three – Moving forward.
Available as an ebook on digital platforms and as a paperback on Amazon.

After the brutal and abrupt discard between August and September of 2020, I came to realise that my experiences throughout the relationship were not “normal” or “healthy”. I had made excuses for his behaviour towards me, I had brushed a lot of things under the carpet so to speak.

As he is diabetic, a lot of the time I put his odd behaviours down to his illness. Perhaps t is his low blood sugars I would say to myself. Or, he is in constant pain from his back and shoulder. It must be really difficult fr him. I didn’t really consider that the relationship was toxic or even narcissistic. although in 2016 I had written about “bullying behaviour” and even “emotional abuse” in my dear diary note, like I said I made excises, he was “depressed” for example.

I later discovered that he had lied to me because chronic and systematic dishonesty goes hand in hand with sexual betrayal, which is a form of emotional and psychological abuse. To rob a person of their sense of reality, to chip away at their ability to trust what their five senses and what their instincts are telling them, and to systematically undermine their ability to trust their own decision-making, memory and judgement is a form of mental cruelty. It is important to see this for what it really is: emotional and psychological abuse.

No one had ever betrayed me the way he had. I trusted him to be the man that I had met at the start of our relationship, the man he promised to be for me, but he had destroyed that trust. After he discarded me, and abandoned me in Spain in September 2020, I went on this mission of discovery, searching for myself, for the person I was before, for the person I had abandoned for him. To be my own independent woman again, I had been able to run my own business, I could afford my own things, and I was able to fend for myself. I could cook, I had a cleaner at my house every month, luckily I had kept my property in the UK, and I still had my own car so that was fortunate. I very soon learned I needed to be responsible for my mental, emotional, and spiritual well-being as well.

I have created some Journaling Therapy Books available through Amazon to complement my first published book. You can try writing as a way to heal.