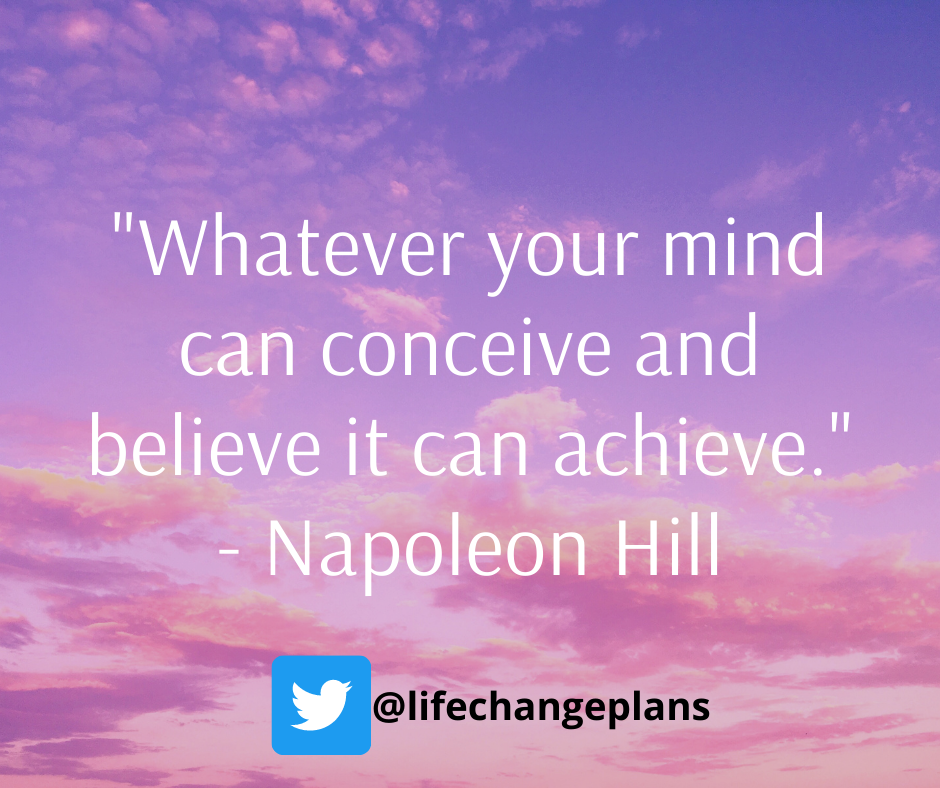 Napoleon Hill was born in 1883, he was born into poverty, when he was a young boy of just 10 years he lost his mother. His father remarried and Napoleon counts his stepmother as one of his sources of inspiration.

By the time he was 13 years he started working as a reporter writing articles for small-town newspapers.
He was given the assignment to write a series of success stories of famous men, and his big break came when he was asked to interview steel-magnate Andrew Carnegie.  What was meant to be a three-hour interview turned into a three-day event.

From this meeting in 1908 Hill was commissioned by Mr Carnegie to interview a number of millionaires to uncover ‘A philosophy of success formula’ that could be used by the average person.

“Whatever your mind can conceive and believe it can achieve.” – Napoleon Hill
He also said
“Adversities are your greatest blessing!” – Napoleon Hill
Hill himself experienced a number of adversities throughout his lifetime, which he often told to his audience as stories in his lectures.

I had not truly appreciated the enormous task that Napoleon Hill undertook when he accepted the opportunity that Andrew Carnegie presented him with.

Listening to a few of Napoleon Hill’s rare lectures I discovered that he accepted the opportunity without even knowing anything about the subject he was to write about. Napoleon Hill tells his audience that he was thinking of all the reasons why he could not accept the opportunity – some of which were;

Yet, despite those thoughts, he accepted the task and told Mr Carnegie “Yes, You can depend on me”.

It then took him over 20 years to speak to some of the most successful businessmen of the time.  Interviewing and studying their success then writing his first eight-volume work the Law of Success.

Another nine years to produce his most acclaimed book, the classic in the Personal Development field called
“Think and Grow Rich” which sold over 7 million copies.

Think and Grow Rich (1937) is not the original title for the book.

Outwitting the Devil (1938) but went unpublished for decades.

In the rare recordings of Napoleon Hill Lectures, he explains how he talked with his subconscious mind. He needed to come up with a million-dollar title for his now-famous book. The book’s original title was “The 13 Steps to Riches” Hill tells the story of how he had tried writing out 500 to 600 titles which he felt none were any good.

Then one night when he was pressed by his publisher to come up with a great title by the next day or he would use his own title.  Napoleon asked what title he had, the publisher replied “Use your noodle and get the boodle.”

So that night Hill prepared his mind by asking his subconscious to come up with a million-dollar title by morning.   Hill says, he was forceful and stated out loud a number of times what he wanted, asking the universe to provide him with the answer. He claims that at 2 am in the morning he awoke with the title in his mind, and rang the publicist to give him the new title for the book, “Think and Grow Rich”

Lessons from being an entrepreneur, I suppose Mindset is the key thing here. First, you have to have the “Can Do” attitude and mindset, do not allow yourself to wallow in the “No can do”.  Be the determined person, “You can depend on me” and not “I’ll do my best”.

If you are interested to learn more here are some of the Napoleon Hill recordings I have saved to my YouTube Channel Playlist.