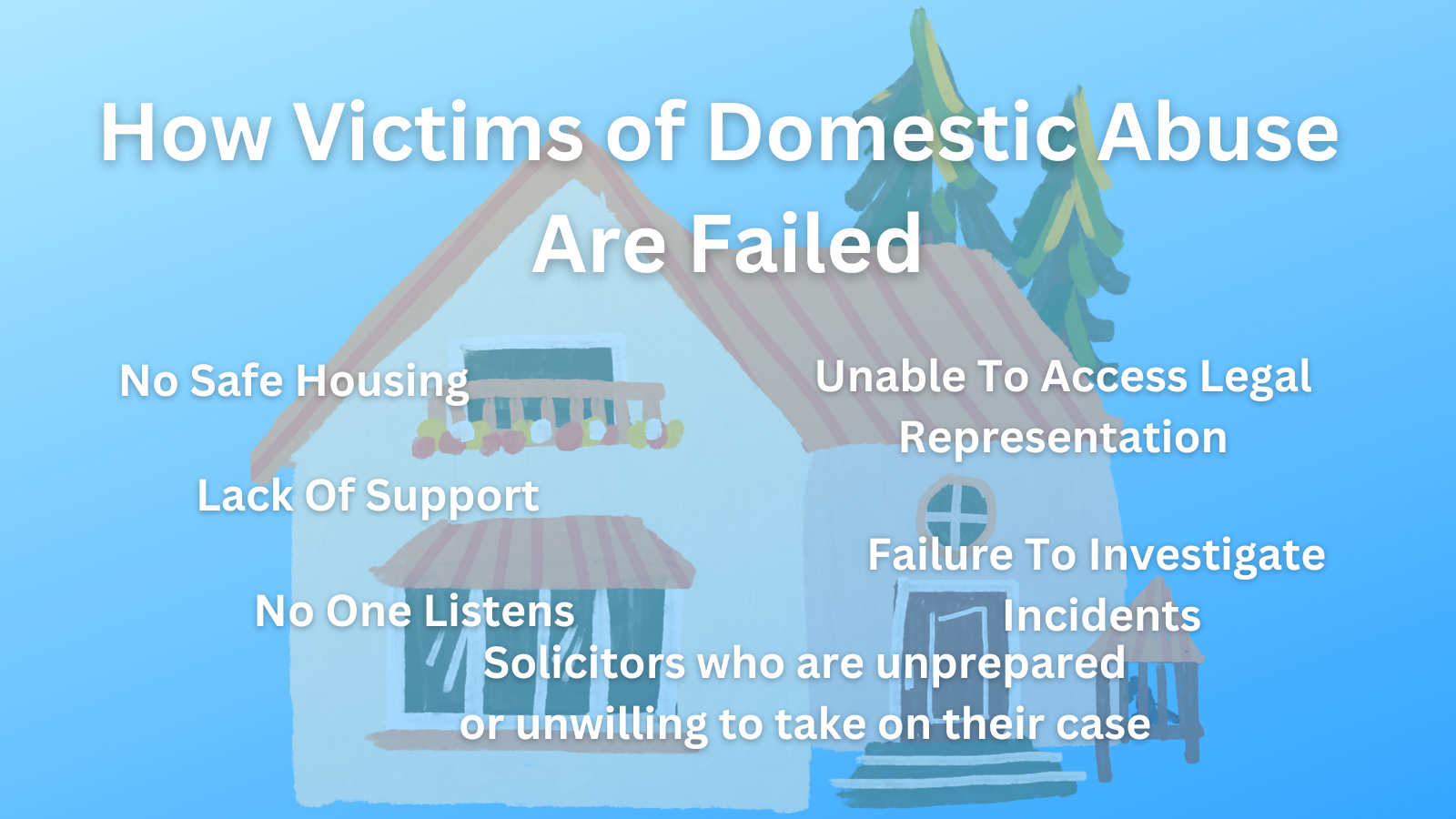 How Victims of Domestic Abuse Are Failed.

Domestic abuse is a serious and all too common problem that affects millions of individuals and families around the world. It can take many forms, including physical, sexual, emotional, and financial abuse, and can leave victims feeling isolated, afraid, and with nowhere to turn for help. Unfortunately, despite the existence of numerous support services designed to help women (and also men) escape abusive relationships and rebuild their lives, these services often fail to provide the necessary support and protection for victims of domestic abuse.

One of the primary sources of support for women experiencing domestic abuse is the police. In many cases, the police are the first point of contact for victims seeking help, and they are responsible for responding to emergency calls and investigating incidents of abuse. However, the police response to domestic abuse is often inadequate, with officers failing to take reports of abuse seriously, failing to properly investigate incidents, and failing to provide adequate protection for victims. In some cases, police officers may even blame victims for the abuse they have suffered, further adding to their trauma and isolation. Sometimes the victim is taken into custody.

Solicitors can also be a vital source of support for women experiencing domestic abuse, helping them to obtain restraining orders, divorce, and custody of their children. However, the legal system can be complex and intimidating, and many women may be too afraid or intimidated to seek legal help. Even when they do, they may encounter solicitors who are unprepared or unwilling to take on their case, or who do not have the necessary expertise to provide effective representation. This can lead victims to have to report incidents to the Police themselves with no legal representation at the Police station.

Social services are another key support service for women experiencing domestic abuse. These services provide a range of support and assistance, including temporary housing, counselling, and support with financial and practical issues. However, social services are often underfunded and overstretched and may be unable to provide the necessary level of support to meet the needs of victims. In some cases, social workers may even fail to recognize the signs of domestic abuse and trauma or may be unwilling to intervene due to a lack of resources or training.

Charities and other non-profit organisations can also play a vital role in supporting women experiencing domestic abuse. These organisations may offer a range of services, including legal advice, counselling, and practical support. However, these organisations are often reliant on donations and volunteers and may be unable to provide the necessary level of support to meet the needs of all victims. In addition, some charities may be unwilling to work with certain victims, such as those with disabilities or from certain cultural or minority groups. Some larger charities are not set up to offer services at all and these organisations have a focus on campaigning to change and improve laws around domestic abuse merely signposting to other services and phone lines.

Overall, it is clear that domestic abuse support services, including police, solicitors, social services, and charities, are often failing women victims of domestic abuse. While these services are essential for helping victims escape abusive relationships and rebuild their lives, they are often inadequate and unable to provide the necessary level of support and protection. It is vital that more is done to improve the response of these services to domestic abuse and to ensure that all victims receive the support and protection they deserve.

Did you know that violence against women is a violation of women’s fundamental human rights?

There are international legal standards and agreements that set out women’s rights to be free from violence.

Yet still, many women suffer in silence. Their voices go unheard. They are persecuted and treated unfairly firstly in speaking out and taking complaints to solicitors or the police. Reports of abuse are often not taken seriously, not investigated, no evidence is called for, and no questions are asked. Secondly, in going to court, the legal system doesn’t seem to understand how a victim could be suffering from shock or trauma, just the fact of standing in a court can be traumatising for a victim.

Conflicting advice and information. Report abuse versus do not report abuse. Victims can be confused, to begin with, they are faced with uncertainty, fear, financial insecurity, and possible homelessness, their whole life has been turned upside down, they are unable to make decisions for themselves, and may be suffering grief and anxiety. To be given legal advice from a solicitor to file a domestic abuse complaint and then not to be supported in taking that complaint forward is just one of the ways women are failed in the process. To have to tell your story over and over again at each new support service is further traumatising. Misunderstandings and miscarriage of justice, time out on appeals. Advised to appeal a judgement by one solicitor and then told not to file any further complaints by another domestic abuse lawyer because “it will make him angry.” Can you imagine being told that? Do you think it might make the victim angry?

What is the point in having elaborate laws in place that are meant to protect and support women and to penalise those who commit the crime of violence against women if those laws are not helping or working for the victims that actually report the crimes? When a lot of the online and offline services funded by the taxpayers or charity donations end up being lip service with no real support.

In several countries, research findings demonstrate that the percentage of homeless women who have experienced domestic violence extends up to 40% in the UK and Ireland to 50% in Portugal and Hungary with an acutely higher proportion of partner abuse of 100% and 93% in Spain and Sweden.
Research: Pathway to homelessness analysing the relationship between domestic violence and housing rights