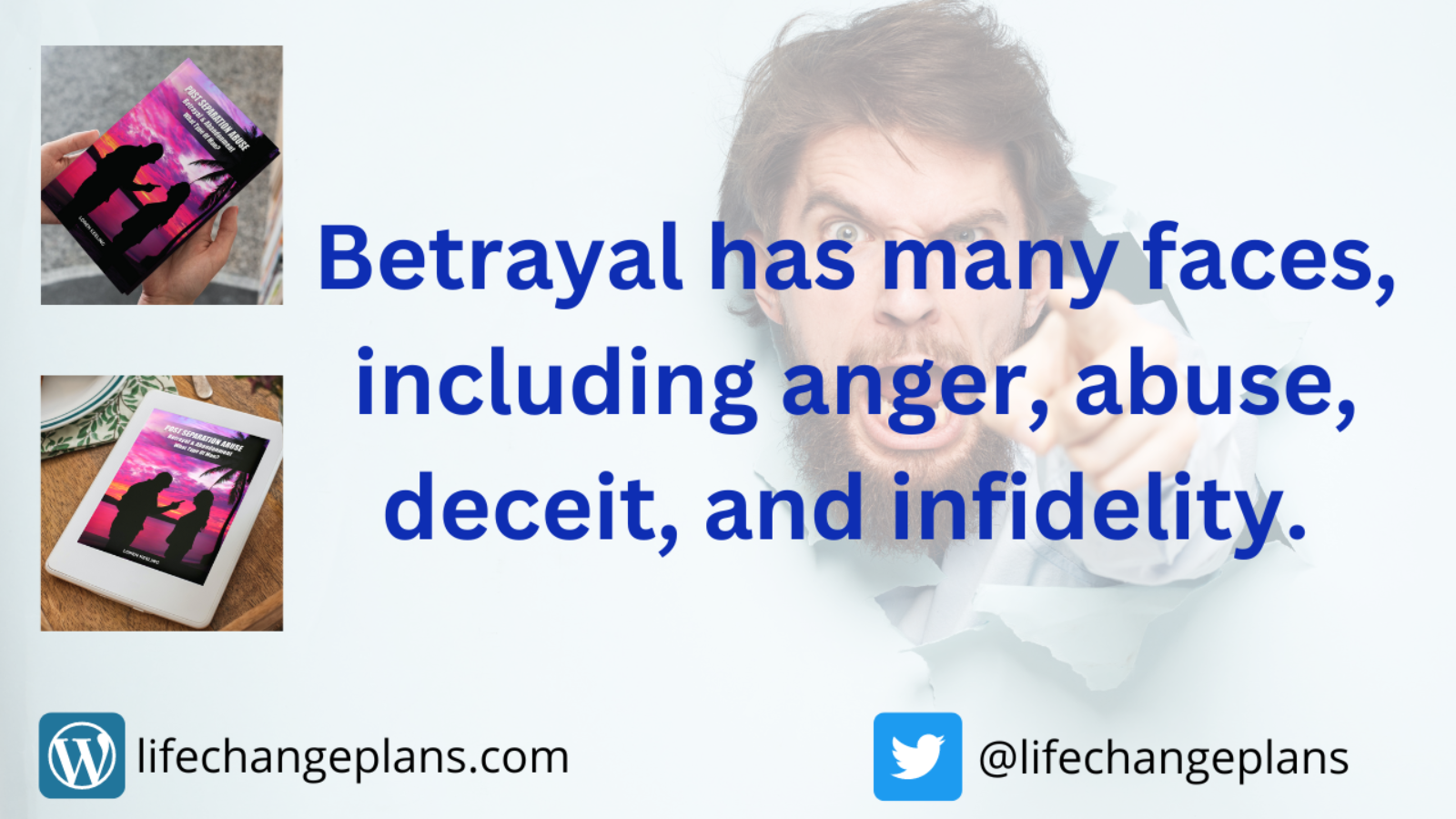 Betrayal Is A Form of Emotional Abuse

Betrayal, a form of emotional abuse, can cause PTSD. Symptoms such as flashbacks, nightmares & impaired sleeping, depression, anxiety, brain fog, distrust, dissociation, are common. Betrayed partners often feel as if their reality has been shaken to its core.

“Experiencing betrayal, a form of emotional abuse, can cause various post-traumatic stress disorder. Symptoms such as flashbacks, nightmares and impaired sleeping, depression, anxiety, brain fog, distrust, dissociation, are common. Betrayed partners often feel as if their reality has been shaken to its core.”

Quote from the article here.

In the beginning, I was cautious about this relationship because just before meeting for the first time I had discovered a number of things that had a few alarm bells ringing. However, even so, I made the decision to meet him on a lunch date.

This was when he actually told me a lot of things about himself and I thought oh okay, he has told me that he is still married but has been separated for three months.

I write about how this relationship unfolded in my first book which I self-published in May 2022.  From the time we met in 2009 to 2020 when the relationship was terminated abruptly, plus also the post-separation legal conflict into 2021.

Find it on Amazon and Digital ebook Stores

In part one, Chapter five I write the story of how my partner confessed his infidelity and my reaction to that confession. December 2017.

How Do Betrayed Wifes Or Girlfriends React?

A sudden and abrupt termination of the relationship. Where without warning the marriage or the relationship is ended. One minute you are talking about your future together and the plans you have then the next day it is all over, finished, terminated, gone. It’s like your whole world just came crashing down, the rug was pulled from beneath your feet. Discarded.

In a healthy relationship, you may realise that things are not working out, that as a couple you have grown apart, and you do not enjoy time together anymore. Maybe that is a one-sided thing and the other person still thinks everything is okay. Usually, people can have a conversation and talk things through and come to an agreement. For example, you might express how you feel dissatisfied with the relationship. You might suggest that as a couple you take some time to see if things can work out, you might set a time frame, say four to six months where you can say if things do not improve in that time then I will leave you. Or we should separate!  That at least gives the other person a chance to understand that the relationship might not last.

Not so with a discard. It can happen with no warning. In my situation, it was after we had been entertaining friends. We had been sitting together and he even asked me to sit on his knee and to give him a kiss in front of our friends.  When the friends had left he suggested having a little nightcap. Then just as we were sitting to enjoy the drinks, he blurted out four sentences that ended our 11 years of being in a relationship.  I write about the exact sentences and what happened in the immediate aftermath in my book. Part 1 Chapter 7 A Bombshell Is Dropped August 2020

After a discard, a narcissistic manipulator monitors you to see if you can still stand up and move on. However, post-separation can be very difficult especially if there has been a bruise to their ego.  What does post-separation abuse look like?

Many high-conflict divorces are linked to domestic violence or narcissistic post-separation abuse. In some cases, the divorce and parental rights in family court battle post separation can last for years.  You can read more on the issues that effect families with children in this blog here by Tina Swithin of One Moms Battle

The abuse can escalate to the point that the victim is threatened, intimidated, humiliated and left in a place of fear and uncertainty. This form of abuse can carry on as the person with the power money and control can use the legal system to their advantage. Often women are left in impossible situations, especially when the law does not seem to offer them any protection. I write about the legal advice I received post-separation in Part 2 Chapters 9 & chapter 10 I have written about the living together laws in UK and Spain. How are cohabiting relationships not recognised in law?

The law looks at legal conflict as two parties who are unable to agree. However, it is often a one-sided action that is taken by the party with the most power, money and control. The person who has lied, cheated, and manipulated the situation. The person who has caused maximum damage and maximum hurt. The person who has no empathy and does not care about your feelings and your emotional or physical well-being.

According to the ex it is a spiteful book

According to the Ex my book is a spiteful act of revenge, in which I reveal secrets about his sexuality, while some of it is complete fabrication and fiction. The reality is his lawyers statements in the Civil Court papers & now the Criminal court papers are not factual.

I had to appear before the Civil Court in June 2022 for a verbal hearing for “precarious eviction”  which means that I am living in a property that I no longer have any right to live in.

1. Because I do not and never did have a rent contract

2. Because my name does not appear on the title deeds or escritura in Spain.
3. We were not married and did not have a legal certificate of living together registered with the authorities.

My legal advice from October 2020 was not to leave the property. I never wanted conflict from the start. I certainly did not want to be in a criminal Gender Violence Court either but unfortunately, I followed the legal advice I had received which did not help me at that point.

I had already been threatened three times that I would be thrown out on the streets, or that he would give me 24 or 48 hours to get out, “it will happen quickly and it won’t be pleasant,” were the words he used September 4th & 15th. Then his email to let me know he was going to take legal action on October 5th. He had written his offer of 50% of the sale price of the house we were meant to share. He also gave me four months until January 2021 to raise the finance to purchase his share. It all meant nothing to him, he changed his mind about all of his promises.

So when the Eviction Court documents were presented to the Judge there were omissions. None of his financial offers was included. The deadline of January 15th, and the three other attempts to negotiate all missing from the statements.
The documents said he gave me until the end of September 2020 to find work and a place to live then it was November for the same reason. Not true, he had told me he would help me to buy another property he would help me by redeeming a mortgage in the UK so that I had a monthly income. The civil action has gone to an appeal, it was only meant to give me more time to find somewhere to go. I still have no income.

And now I have overlapping litigations. On July 1st the Ex made seven criminal allgations against me. Apparently, according to the “specialist” Barcelona lawyers, he (aka the Ex) had reached his limit when after the court hearing the defendant (aka me) threw a bag of used sexual objects at his clients feet.

The lawyer states, his client reached his limit when the defendant after the eviction hearing threw a bag full of used sexual objects at his feet while yelling.
🤣🤣🤣
Actually… I did return his items to him

That was my stark realisation along with his obvious behaviours that I had been used and abused throughout the whole relationship and that I had meant nothing to him.

So, yes, while he was standing with his new wife, and two other men, I guess his lawyers, I took the items and I threw a red bondage rope at his chest, one of the two men standing with him gasped in shock, as I said, thank you, as the rope hit his chest and fell to the floor. Then I threw the ball gag and the other sex toys at his feet while saying thank you, thank you, twice more. I didn’t say the full statement that he made me say after sex with him, as that was “Thank You, Sir!”
He did not deserve the title.